We stopped at the cute town of Meeteetse and played silly. We also tried incredible chocolates! The owner of the chocolaterie (find his name) spends a month every year in Europe, mostly France, to study how to make truffles. I wouldn’t be surprised for his store to become a landmark of Wyoming. It was so good! I told him that I was part Swiss and that my brother is a confiseur and chocolatier too so I truly care about the craft well mostly what I eat!

We headed to the Dinosaur Center. We had such blast. Our guide told us that he was doing his dream job, the one he dreamt of doing since he was 2 years old. Actually, I don’t know anyone who doesn’t like Dinosaurs! We kind of didn’t want to leave. The Center is expanding and has several archaeological sites. 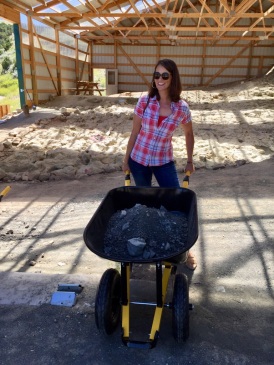 We sang Indiana Jones in the bus as Manuela started humming it and asking what that song was. Quite a moment!

We then traveled towards Riverton and captured some B-Roll. After 2 hours of driving we arrived at our hotel but went out to see the Northern Arapaho Experience (Native American Dancing) and we were glad we were invited to see them.

We then headed to the hotel and went out with the cast and crew to eat out. We were so tired but content. We sat outside at a terrasse and ordered some very Italian food and enjoyed some drinks, as the following day was off as it was 4th of July. We laughed, Manuela kept saying the silly things I said in the car… We didn’t do much on the 4th because we were tired and we were afraid of drunk drivers. The hotel had a special pizza and drinks and it was great.

We had the 5th off too so Manuela and I could do some laundry, had a facial (see pictures) and I discovered Walmart! I had never shopped there but for once in Florida when I visited my friend Judy who had moved back to live with her mother.

Well, Walmart has everything and that’s great because you won’t find any other store really. The crew was smiling at me as I was saying what I had found at Walmart!

A big thank you to #ThatsWy and #BrandUSA team!

Sweet note from the housekeeper. Well done! The room was well taken care of too! Thank you! 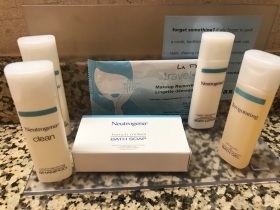 I missed capturing the bed I was probably exhausted – ahah!